ALBUQUERQUE, N.M. (KRQE) – A city councilor would like to see a historic fire station restored. Councilor Isaac Benton is hoping to get funding to upgrade the Atchison, Topeka, and Santa Fe Ra…

When this happens, it's usually because the owner only shared

The single most important factor in the development of Albuquerque between 1880 and 1930, in its transformation from a farming village into a commercial and industrial center, and in its emergence as the leading city of New Mexico was the railroad. Throughout this period, the Santa Fe Railway was the city’s leading employer. In addition, its buildings were viewed with community pride as signs of progress and prosperity. Because of the railroad’s leading role, these structures are prominent reminders of this important period in Albuquerque’s history.

The Historic Railroad Buildings of Albuquerque

Help identify the men who worked in the Shops 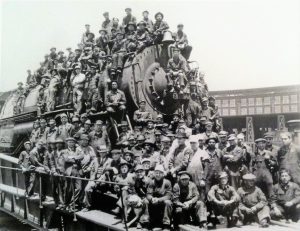 New Lego exhibit at the Wheels Museum. View The New Mexico Lego Users Group has
partnered with WHEELS to have a beautiful Lego Train layout for children of all ages to enjoy. The exhibit will vary from season to season and we invite you to come see this new Lego train exhibit.

Do you have a few hours each month to help the Wheels Museum? Volunteers are needed so the Museum can be open more; run the model railroad trains, also help needed with events, marketing, fund raising. Call Leba Freed at (505) 243-6269.

Febuary 16, 11 am. Bob Bovee Long Steel Rails concert. This program for all ages presents songs and stories about the famous trains, rail workers, hobos, train wrecks and train robbers. Call or email Leba Freed for reservations at (505) 243-6269 or leba4@aol.com.

April 8, 11 am. “Historic Albuquerque” Ronn Perea will present old Albuquerque anecdotes including delightful stories about our beloved Alvarado Hotel and the politicians, actors and entertainers who stayed there. This is a free event but, of course, donations are always appreciated.

May 19-May 23, Train trip to the Grand Canyon. Only a few spaces left.Scheduled through Amtrak Vacations, call Leba or Janet at (505) 243-6269 for reservations and more information.